DISC GOLF is available in the territory of Kandava Pūzurgrava.

Disc golf is a "flying saucer" game that is often compared to frisbee, but in reality this game is very similar to golf. The golfer's task is to hit the ball in the hole, while the disc golfer's main task is to throw the disc into the basket.

Disc golf can be played at any time of the year. There is no age limit in the game of disc golf, you can play both young and old, and special physical fitness does not matter in this game. In disc golf, the discs are divided into three categories - far (they are designed for the farthest throws, the peculiarities of the flight allow such a disc to be sent along a curved trajectory), medium (the flight is straighter, which allows such a disc to be used in narrower places), short (the straightest flight, but distance - smaller). The main task of the game is to throw the disc in the basket. The player throws his disc forward, but obstacles, bushes, trees, hills can occur in front of the throw. This makes the game much more interesting and exciting. The key is to hit the disc in basket with as few throws as possible. One round of play has 9 baskets the approximate playing time is 30 min -1 hour.

Disc golf is available for FREE.

There are 7 such plates. (available free of charge). 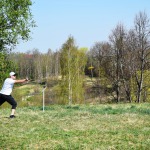 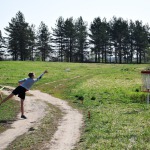 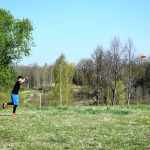 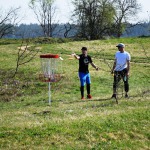 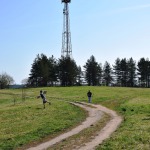