At the foot of the Buses Hill Fort, there are three indubitable cup-marked stones. Two of them are situated at he foot of the W slope of the hill fort`s precastle. As both stones had been split once, it is possible that they used to be two parts of one big stone. Currently the dimensions of the stone are 1,2 x 1,1 x 0,5 m, and you can see 17 whole cup-marks on it and a half of one cup-mark (the second half had been split), and the second stone, the dimensions of wich are 1,3 x 0,8 x 0,3 m, has only one cup-mark.

The history of making cup-marked stones is dating back as far as 3000 years, and it is one of the reasons why there have no indubitable versions aboutthe practical or sacred signifcance of those stones preserved until nowadays. Taking into account the fact that such stones are found almost all over the world, scholars have developed about 30 different theories about the reason of their making. Some of them state that cup-marks orginate from the process of granulating healing herbs, from sacrificing, from obtaining stone minerals for healing purposes, etc. Still the reason could be quite practical as well - for marking the kin`s family tree, counting the herd, marking the boundary, etc. In Estonia, on the Muhu Island, in turn, there has been an ancient tradition observed of entrusting one`s wish and sending it to the Thunder as the mightiest of the gods by hitting a smaller stone against a larger one, thus creating a similar hole in the stone in the course of time.

The 3rd Cup-marked Stone, its dimensions being 1,9 x 1,0 x 0,7 m, is situated on the opposite side, namely in the middle part of the E slope, closer to the imula River. The stone is overgrown by moss, it is not visited by people, hard to approach. It has one cup mark that has undoubtedly been made by a human, and the second smaller cup-mark that could be of natural origin. 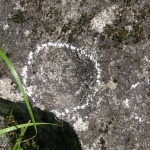 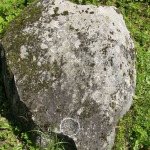 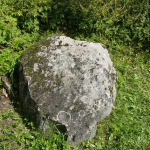