It was a long time ago when this land was covered in ice and snow. The cold was so terrible, that nothing could survive here. But one day the ice and snow started to melt and created huge lake. It became bigger and bigger till it broke out the coast and started to flow to the see. So valley and a river was created. People started to build their houses around the coast, animals found their home around the place as well, and fishes lived in the river.

One of these fishes were uncommon as it was really, really big. It didn't manage to swim to the sea, so it stayed in the river. In the spring, when the water levels rose people would go to the river and threw coins in it and called "Abava, Abava, Abava!" Then the fish came from the water and on it's back people would cross the river.

But one day people decided to build a stone bridge, so they dug a new place for the river to flow in, and filled in the place where the fish lived. The fish was buried in the ground and turned to stone.

Since then people crossed the river by the bridge, and the big fish was no longer seen. But still people continued to call Abava and they still are doing it now. People say, that before turning to stone, the big fish has told that anyone who would find it and bring it out to celebrate it, in graditude for anybody who would ask, it would fulfill three wishes, but with one rule - one at each time. 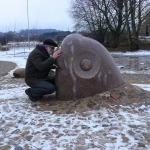 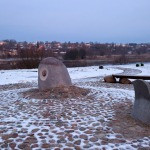