In the 16th century, Vāne Manor was the place, where his final days were spent by the Livonian chronicle writer, the secretary of Gotthard Kettler, the Duke of Kurzeme, and his confidant - Solomon Henning (1528-1589). Vāne Manor building was constructed in the 70-ties of the 19th century. During the 1905 revolution, the building was burnt down. It was reconstructed again only in 1936-1940 for setting up a school. 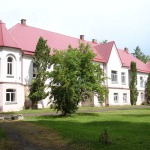